One of my favourite shows to watch as a kid was The Price is Right.  At the end of every show, Bob Barker would always say “Help control the pet population. Have your pets spayed or neutered”.  While I didn’t know what that meant at the time, I knew it was important.  I knew it was something that people who owned animals did, or so I thought.

While that may sound awful, scary and painful, it’s not.  Vets have been performing spay and neuter procedures for years and it’s quite a simple and routine procedure.  All animals are put under general anesthesia and vets do small incisions to perform the surgery.  It can take about 14 days for an animal to be fully healed but if your pet is anything like mine, Freckles was back to normal after a couple of days.  You just need to make sure the incision doesn’t get infected (as it’s the same for humans).  If you notice your animal is licking the incision, that’s where protective collars (AKA the cone of shame) come in or in some cases, I’ve seen people put a t-shirt on their animal to prevent licking.

The number one reason to spay or neuter your pets goes back to Bob Barker: to control the pet population. Unaltered animals will reproduce.  This results in many unwanted litters of puppies and kittens, which can quickly overwhelm unprepared families.  These unwanted animals end up in the care of animal rescues and shelters, or worse.  In some shelters that are overwhelmed, they will have no option but to euthanize healthy animals.  These animal aren’t even given a chance.  As someone who volunteers with two animal rescue organizations, I can tell you for a fact that both rescues (as well as every other rescue I know) are constantly overwhelmed by the sheer number of puppies and kittens coming in.  I’ve only been volunteering with both rescues for one year but I have lost count of the number of times we have had to close our intakes of new animals because we were so overwhelmed with how many animals we had in care.

Right now, there is a crisis in Edmonton with the cat population.  Every single day, we get phone calls and emails from concerned citizens regarding a momma and babies they found.  Us and every other rescue in Edmonton (and I’m sure Alberta) is literally overwhelmed right now, and animals that aren’t in care are left to the environment, which can be deadly for newborn kittens especially with winter approaching. 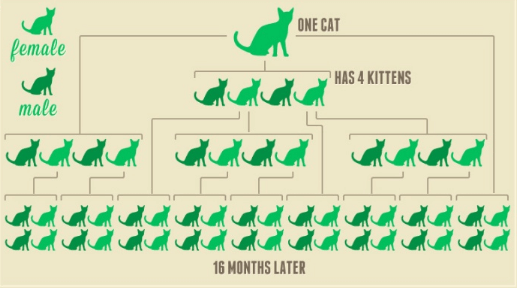 There was a recent story where forty eight dogs and puppies were rescued from High Level, Alberta and transferred with the help of New Beginnings Animal Rescue Society to the Alberta Animal Rescue Crew Society in Calgary.  While the sheer number of dogs and puppies seems like a lot, it’s not.  This happened as a result of a handful of un-spayed females and un-neutered males.  When you have dogs that can become pregnant with 11-13 puppies at a time, and there are multiple pregnant dogs, that’s a lot of unwanted puppies that rescues and communities have to deal with.  This infograph below shows how quickly and how many animals can reproduce: 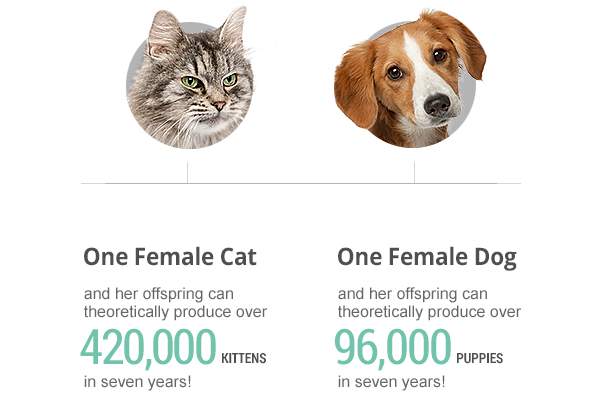 Like anything, there are many myths regarding spay and neutering that people believe to be true.  Some of those myths include that it’s not healthy, your dog will miss “their balls”, it will change them behaviourally, it will cause cancer and your pet will gain weight.  I can tell you that all these are completely false.  If you don’t believe me, you can read it HERE and HERE.

Not long ago, I had someone reach out to me who reads my work and ask me about neutering his dog.  He was not sure as he had read many of the myths stated above.  I was able to convince him to be a responsible pet owner and have his dog neutered.  I can happily report he took my advice and his dog is now living a happy and healthy life.

Also, please do not breed your animal for money.  There is no need for that.  Please leave that to CKC (Canadian Kennel Club) or AKC (American Kennel Club) registered breeders who know what they are doing and have very strict health standard for their animals.  Also, if you have got your dog from a registered breeder, they will make you sign a contract stating that you will not breed that animal and some of them will require proof that the animal has been spayed or neutered. 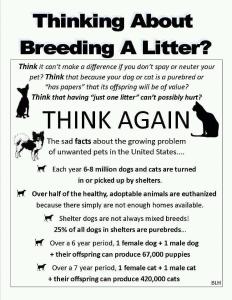 If you are looking to take your dog to a doggy care care or board them while you are away, many facilities will not accept dogs that have not been spayed or neutered.

Another area that people seem to argue a fair bit about and use as an excuse to not spay and neuter is how old their dog is.  It is recommended that animals get spayed or neutered at around 6 months.  Some people argue that is too young and will cause problems like hip dysplasia.  There is honestly not enough research to back that claim up.  There are certain breeds that are going to be more prone to hip dysplasia (such as Great Danes, St Bernards, Labs and German Shepherds) and neutering will not change that.  If you are unsure at what is the right age to spay or neuter your animal, please have a conversation with your vet about it.

One of the biggest reasons people do no spay or neuter their animal is because they feel it’s “too expensive”. Spay and neutering your pet is worth the cost and is honestly probably one the cheapest vet bills you will ever have.  I have three dogs and I will tell you that spaying and neutering is not that expensive compared to many of the vet bills that myself and others have had to pay (including bills close to $1000 to dental work on just one of my dogs).  Let alone if you ever have to take your dog to the emergency vet which can run you well into the thousands of dollars.  You need to be financially prepared for that.

By the time you add up the costs of food, treats, toys and regular vaccinations in a year, spaying and neutering is not that expensive and you only have to do it once.

There are options for people in and around Edmonton looking to spay and neuter their animal at a lower cost.  The best place that I can recommend is the Edmonton Spay and Neuter Clinic as they offer services at a lower cost that most veterinarians in the city do.  As well, the Edmonton Humane Society offers a program called the PALS Program where they offer a low cost spay and neuter option for lower income individuals.

I do realize that it can be challenging for individuals who live in rural areas to access spay and neutering.  That’s why many local rescue organizations go out to communities in Alberta to spay/neuter and return people’s pets to them.  Another great initiative is the Alberta Spay and Neuter Task Force.  They will go to communities where pet overpopulation is a program and set up mobile spay and neuter clinics in those communities.

I hope to anyone reading this who has not spayed or neutered their animal that they do so.  If you are that person, it’s the easiest way to be a responsible pet owner.

If you are still not convinced why you need to spay and neuter your pet, please go and volunteer your time with a local rescue or shelter.  Go see first hand what those involved in rescue have to deal with every single day and then you will hopefully understand why we get frustrated and angry with people who don’t spay and neuter.

If I’m able to convince one person out there to spay or neuter their pet, then mission accomplished.