A few months ago, I wrote a post talking about how I manage Dolly’s allergies. Today, I wanted to do another post how I manage her seasonal allergies as the first post talked primarily about her food allergies.

Over the winter, Dolly’s allergies were finally under control and she was off her Apoquel and only getting baths once a week. We were even finally able to use a regular shampoo instead of her medicated one from her vet. This was a huge step and we were so happy to not have to go to the vet every month for refills and skin check-ups. We found that feeding her kangaroo as well as adding in some raw venison was working for her (as I like adding raw to her diet as much as possible and recently discovered raw kangaroo in the city). We also started adding an Omega Oil to her food and her skin and coat were the best they’ve ever been.

Then the snow melted, the grass and pollen came back and so did her allergies in a really big way. We would wipe her paws anytime she came in from outside using hypoallergenic wipes and it seemed to work, but only for a bit.

As the weather got nicer, I was finally able to take the dogs for longer walks, so one day I took them for close to an hour. Multiple times during that walk Dolly stopped, sat down and start scratching. I knew something was up as she never does that. The scratching was more intense as the walk went on so when we got home, I took a look at her skin and she was covered in hot spots everywhere. So I grabbed her and gave her a medicated bath right away as I knew she was having a major reaction to something outside. After her bath, I gave her a ½ tablet of Apoquel an called the vet to get her checked out. I had a feeling all the progress we made with her would take a few steps backwards.

I took Dolly in and I could see her poor paws had hot spots everywhere and she would not stop licking and chewing them. The vet did some skin swabs on her paws and in her ears (as I had a feeling they were a bit of a mess as well) and sure enough, along with hot spots, she had yeast and small amounts of bacteria in her ears and paws and was the result of seasonal allergies as the vet said we were the fourth patient that week that came in with a flare up.

We came up with an action plan and to help put the fire out as my vet would say, Dolly would have to go back on her steroids for a week to help calm things down. She would also have to back on regular doses of Apoquel to help manage her itchiness. She was also given a medicated ear drops and a home ear cleaning solution for us to use with her. We would have to go back to bathing Dolly twice a week using her really strong medicated shampoo and on days where she didn’t get a full bath, we would have to bath her paws every day (something that will have to continue until the snow falls sadly).

I did however recently start using a natural solution to clean and moisturize her paws called Reliq. The great thing about this line is they use all natural minerals instead of harsh chemicals like alcohol to clean and sooth skin and paws. There is nothing I hated more than putting something on Dolly’s paws all the time that hurt (and only like to use it if things get really bad).

I also found an all natural hot spot spray that is also free of alcohol and instead uses Aloe Vera as an ingredient so it soothes rather than burns. I find this great not only her paws, but her belly, neck and a spot on her tail that irritates her once in a while. 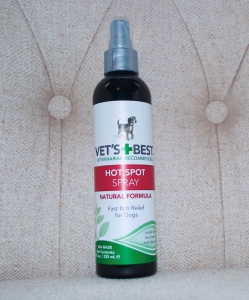 I really love my vet because she would rather treat topically through bathing than medication and only use it when things are bad. She agrees with me that Dolly being on a lot of medication (like steroids) are not good for her long-term health and are only a band aide solution. She prefers to take a natural approach as much as possible and actually likes that we do our research on natural solutions (as I know not all vets sadly feel that way).

As I knew I wanted something that would be more of a long-term solution, I started to do some research on dogs and seasonal allergies. It was incredibly interesting some of the things that I was able to find out. I recently discovered Holistic Pet Radio on Instagram and they recently did a podcast regarding seasonal allergies and your pets. I actually was able to learn a fair bit from it and highly recommend you check it out (along with many other great topics they cover).

One of the biggest take always I got was regarding how gut health plays a huge factor in things like seasonal allergies. So, I have recently started adding a probiotic to her food, coconut oil and on occasion, small amounts of kelp to her raw venison (I only use about ¼ of a teaspoon as I don’t want to feed her too much of it as I know it can cause issues if you do). 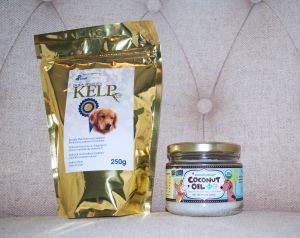 A really good piece of advice I got from the podcast was giving your dog bromelain and quercetin as they act as natural anti-inflammatory and anti-histamines. Some people have even referred to it them as “Nature’s Benadryl”. I was fortunate enough to find treats that contain both and give one to Dolly two or three times a day (there is a listing of how much to give your dog based on their weight). 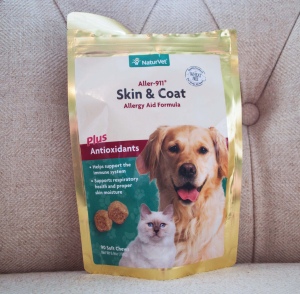 I can say that since starting a more holistic approach to dealing with Dolly’s allergies, she has been doing amazing. The biggest thing that I am finding is if I go more than two days without bathing her paws, she does start to lick them (even though she just chews her claws for whatever reason but there is a difference from when she does that compared to when her paws are irritated). Dolly’s allergies are finally under control and she is the healthiest she’s ever been. I can’t do anything to stop seasonal allergies, but I’m happy that there is a plan in place to manage them.

I want to add that I am not an expert no and highly recommend speaking to your vet about things. And if you are not happy with what they recommend, seek another opinion as you are your pet’s caregiver.